Troubleshooting - reading logs and asking the right questions, like

The Skype for business client logs to the .uccapilog and .etl logs and the the Application log in event viewer.

New features in the Desktop client 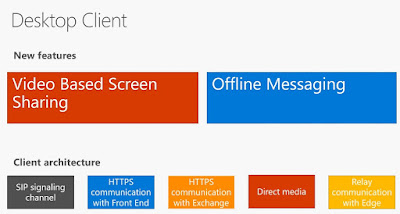 Previously all screen sharing was done with the Remote Desktop Protocol (RDP) which is limited to a maximum of 8 frames per second and it runs over TCP. VbSS can go up to 30 frames per second and can use the quicker "fire-and-forget" protocol UDP. VbSS will also give a noticable faster call setup or start of the screen sharing in an existing session. There is no visual indication in the client to indicate if RDP or VbSS is being used for screen sharing, therefore we need to examine the logs to see if it works properly or not. Some sort of graphical indication and/or information about which codec is being used might come in future releases of the client, (please go to www.skypefeedback.com to vote for this idea if you like it.) In the SDP, RDP screen sharing is announced as
m=applicationsharing 53111 TCP/RTP/SAVP 127
and VbSS as
m=video 50054 RTP/SAVP 123 123
both media types are offered and accepted in the SIP dialog due to fallback reasons. If one of the clients in a meeting do not support VbSS RDP will be used as a fallback and if you would like to force the meeting to use RDP rather than VbSS, turn on recording. After a meeting has changed from VbSS to RDP it will not fallback to VbSS even if circumstances change.

Also, please note that VbSS is using UDP so make sure to open your firewalls when enabling this feature, more information about this is available in the article: Video based Screen Sharing for Skype for Business Server 2015. Audio is not supported in VbSS, but a workaround might be to use the Virtual Audio Cable software, and VbSS will not be in the RTM version of the Skype for business for Mac client, but will come in a later update.

Offline Messaging uses Exchange Web Service (EWS), Exchange Server and the message history spooler so it works even with a Lync 2010 server. EnableIMArchiving in the client policy must be enabled for Offline Messaging to work.

PSTN conferencing in Office 365 is a quite complex animal.

In Office 365 there is a user forest and a "PSTN resources" forest. This means that a PSTN conference is two cascaded conferences in two separate MCUs. Without dynamic conference IDs there is an issue with these two conferences not getting connected. This issue is called a bar-belling failure (not "disappointing" as the guy sitting in front of me in the audience suggested). The symptom for the users are that VoIP users can hear VoIP users and PSTN users can hear PSTN users, only. Also, the users might see an "Uninvited guest" in the meeting. There are two ways of avoiding this to happen. Instruct your users to use the "End meeting" function when leaving a meeting (but how well is that going to work out?) Or contact support and ask them to enable your tenant for dynamic conference IDs (and this is the real fix which is available since September 1st, 2016.) Eventually all tenants will be fixed and this issue should be a thing of the past. 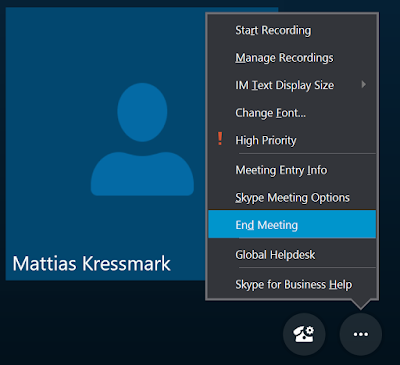 Skype for business for Mac

The presentation continued with logs in the Mac client. All you need to know about the old Lync for Mac 2011 client is summarized in this article: Removing Lync for Mac2011 :-)

The Mac client has a dependency on the Certificate CRL - if a location to the CRL is included in the certificate it must be accessible by the Mac computer. That is accessible via http(s) and not LDAP. Also, be aware that a Windows CA does not have an http(s) address to the CRL published by default, LDAP only.
Snooper 7.0.1168.1 will be released together with the Mac client, and this version can open and parse Skype for business for Mac client logs.

Posted by Kressmark at 5:03 PM