Presented by Lasse Nordvik Wedø (@lawedo)
Skype for Business Cloud Connector Edition (CCE) is a set of 4 virtual machines delivered as an appliance.

CCE can be seen as a gateway between Office 365 and your own PSTN connection. Please note that CCE does not contain a Skype for Business Registrar, i.e. it is not possible to home users in CCE.


The presentation continued with PowerShell demos on how to configure Office 365 for CCE, how to configure a user for PSTN access, how to configure a Sonus SBC with integrated CCE, number manipulation and mulitsite configuration.
Key commands: Why should we use an Session Border Controller (SBC) together with CCE?
With a SBC we can connect multiple trunks to a single instance of CCE and we can also handle analog devices such as fax machines. We can do additional transcoding, SIP message manipulation, TLS connections, DTMF, reduce latency and DDoS protection just to name a few advantages. An SBC will also allow us to use an existing infrastructure (trunks) so that we can migrate smoothly and retain a carrier contract.


It takes about 75 minutes to get up and running with CCE on a Sonus appliance, compared to several hours if you chose to download the CCE software and install it manually. 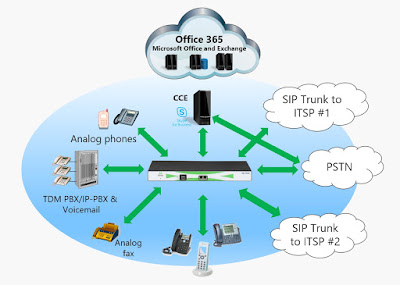 Posted by Kressmark at 3:44 PM No comments: 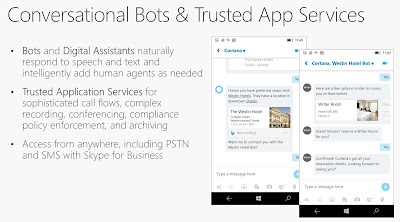 The bots are coming...

The presentation started with a demo of the Smartsheet integration with presence, conversations and meetings.

Next was Skype for Salesforce where Skype is built into the Salesforce GUI / Webpage featuring videocalling in Edge without a plugin with the call and editing in Salesfore happening in the same window.

Embedded video calling in Google Chrome using the WebRTC implementation in Chrome were demoed, using a "media provider" built into the Chrome browser, just as in Edge.

Web and Chat is cool, but voice still accounts for more than 60% of the traffic for most customer service organizations. Hence, "Trusted applications" in the cloud will be supported by a coming "Trusted applications API", which was demoed together with the WebSDK in the session. A demo featured an anonymous user in a web chat session with an agent who could bring in a second agent / expert and a consumer Skype healthcare bot via the Bot Framework. The demo also featured a PSTN call into a trusted application via Office 365 PSTN calling with DTMF signalling, basic IVR and agent routing.

UCMA will probably not be ported to the cloud, but WebRTC is on the roadmap for Skype for business (starting with Online) 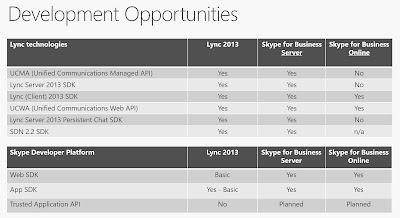 Posted by Kressmark at 4:09 PM No comments: 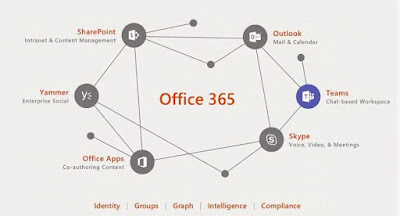 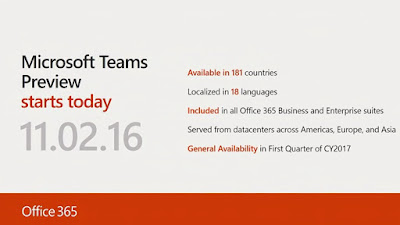 Posted by Kressmark at 5:40 PM No comments:

Options for voice in Office 365 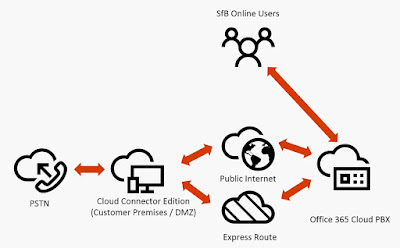 CCE was first released in April of 2016 and there have been 3 minor updates or versions so far. The next major version (2.0) is probably coming early next year.

CCE should be seen as a "black box", i.e. do not change the topology, scripts, software or anything really. CCE deploys in approximately 7 hours (or 45 min if you get it as an appliance.)

CCE is scaled for 70 percent internal traffic, that is media not going through edge component of CCE, and 30 percent external traffic. It is not designed to be used in hosting scenarios.

The presentation continued with technical details around the installation of CCE.

Is it possible to use VLAN tagging for the two different networks CCE is connected to?
Yes.

Is it possible to use a public certificate on the inside?
No, import the internal CA root certificate.

Is it possible to let CCE share hardware with something else?
No, the cloud connector is an appliance.

Posted by Kressmark at 1:27 PM No comments: