Introduction to Skype for Business

Today Microsoft Sweden invited us to the office in Kista to get an introduction to Skype for business and to have lunch. Niklas Dahlgren, Arifur Rahman, Emelie Ekblad and Andreas Svanberg from Microsoft were presenting. Martin Lidholm was talking about how to successfully roll out a collaboration platform, and Mats Lillenberg from Länsstyrelserna was talking about their Lync 2010 installation. Thanks Guys!

In Swedish the product will be known as "Skype för företag" since "for business" is a translatable term. 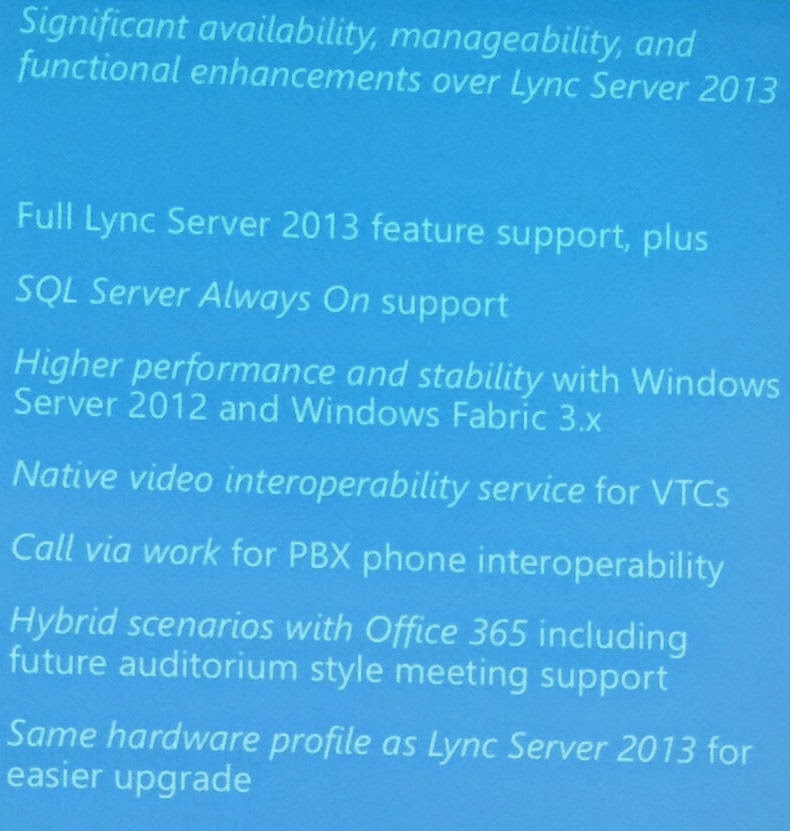 All functionality of Lync 2013 will still be present in Skype for business.

Support for SQL Server Always On

One new server role will be included in this release, the VIS, Video Interoperability Server role. No content sharing between Cisco VTC and S4B will be available (S4B uses RDP for sharing - Cisco uses a video stream)

Call via work will still be there, but will it ever be used in Sweden?

Broadcast meetings / Large Meeting support / auditorium style meetings.
Will be a cloud solution using Microsoft Azure, even if all connected users are internal.
It will support more than 250 users, but not defined now exactly how many users that will be supported. Probably will more functionality be introduced in this way.

Support for federation with "consumer Skype" users who have a SkypeID or an MSA, with a directory search. However there will be no search from Skype into Skype for business.
Skype / Lync 2013 video is already available.

Some type of web RTC, voice and video via a webpage, will be supported. 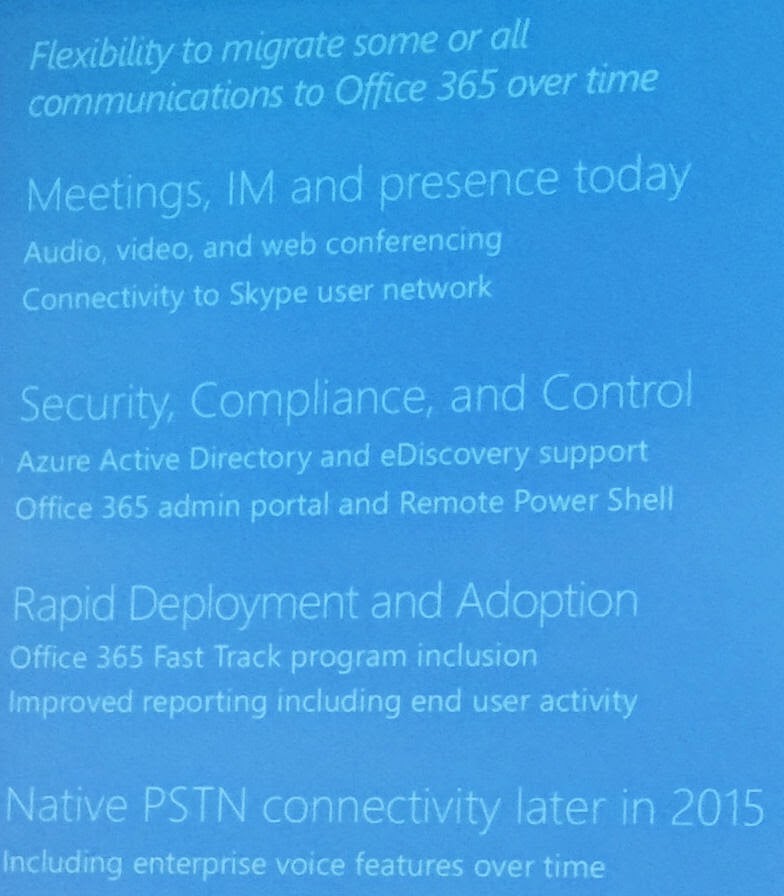 "Native" PSTN connectivity will be available in Lync Online later in 2015, but in the US of A, not in Sweden :-(

Certified devices have always been important in Lync, this will continue in S4B. S4B will not adopt the laissez faire Skype consumer approach. The consumer version of Skype has a test tool that will verify if the connected device is good enough. Certified or qualified? Qualified or optimized? There is a difference but this is mainly American legal mumbo-jumbo and should not even be discussed in Sweden (in my opinion). SIP Trunks and PBXs are certified, headsets are qualified. There are significant quality differences even between different qualified headsets (you get what you pay for.) The qualified program is only for Windows devices and not for devices connected to iOS or Mac.

How good is the new in-place upgrade process?
It "should" work, but of course it depends on the existing system. A side-by-side migration can be performed in case you do not really trust the in place upgrade.

A question on usability from an organization with 35% of users on Windows and 65% Mac users was asked. The current Lync client for Mac is not to great, when will a new better Mac client be released? Mac users will unfortunately still have to use the existing Mac Lync client with the S4B Server. Skype to S4B video calling will not work on Mac.

Not much is new in administration, same tools as for Lync 2013 will remain.
Some new improved reporting will come later on.

When will S4B be released? "Soon", "in the first half of 2015".
In the Office Summit tour more information will be presented further on.

Posted by Kressmark at 1:51 PM No comments:

I have enjoyed training people on Lync 2013 for about one and a half years by now, and Lync 2010 before that. I would like to thank all my students for their participation in the courses, all the questions, comments and ideas have really got me thinking and working. So far I have met some 150 students in Sweden and around 50 international English speaking students. I will probably run a couple of more Lync 2013 classes, but currently I am really focusing on the forthcoming Skype for business software (aka Lync 2015). (Anyone need a Skype for Business trainer?)

How do Lync show free/busy information and meeting details from Outlook?
http://windowspbx.blogspot.nl/2012/05/lync-user-tip-19-understanding-lync-to.html

How do the privacy relationship change what information others can see about me?
Control access to your presence information in Lync

What rights are needed to publish a topology from the Topology builder or the Management shell?
The user must be a member of the RTCUniversalServerAdmins and Domain Admins groups.
Publish the topology in Lync Server 2013

It is also possible to delegate rights to the Enable-CsTopology command to members of the RTCUniversalServerAdmins group using the Grant-CsSetupPermission command.
Delegate setup permissions in Lync Server 2013

What is the difference between RTC groups and CS groups?
Planning for Role-Based Access Control

The RTC groups control the access rights for users locally; remote powershell is using the localmachine account which in turn is member of certain RTC groups.
http://exchangemaster.wordpress.com/2011/12/14/getting-lync-powershell-to-use-rbac/

Can we use nested groups (groups in groups) with RBAC?
Yes.

Can we participate in Lync meetings via BlackBerry?
No, presence and IM only.
http://bizblog.blackberry.com/2013/02/microsoft-lync-2013/

Are there solutions to minimize SPIM (Spam IM) in Lync?
Yes, there are settings in the Lync client to block IM from federated users that has not yet been added to the contact list.

Why is a domain name (adatum.com) present as a SAN in the external Lync Edge certificate?
It is used by the XMPP proxy software.

Is it possible to dial out from a Response Group?
Yes, an anonymous group.

Can we access a persistent chat room over Lync 2013 edge?
Yes.

Can we invite federated users to persistent chat rooms?
No.

How can we know who is talking when looking at a Lync meeting in gallery view?
There is a blue ”bar” underlining the video feed of the person that is talking.
Lync 2013: Videoconferencing with Gallery View

What license is needed to host a Lync meeting where a participant is calling in via dial-in conferencing?
Audio conferences hosted by the user require either the Enterprise CAL or the Plus CAL–this means if a user has either of these two CALs, the user is licensed to create Audio conferences. (See the Licensing guide)

Posted by Kressmark at 7:38 PM No comments: