MS Ignite BRK3140 - The Voice of Skype for Business

Presented by Jamie Stark, Product Manager at Microsoft. (This is one of the sessions I also attended in person.)

Real-time broadcast meetings translated into several different languages on the fly is a feature that is being worked on right now. The Skype translator is already available with English, Spanish, Italian and Mandarin in the preview, as well as 50 written languages for instant messaging translation. Skype Translator uses machine learning, so the more people use the technology, the better the experience for everyone, i.e. download it now! Today the Skype translator is a "modern" Windows 8.1 app, but later this year it will also be available as a regular windows executable. In the session we got a demo of Skype for business with a translator while it transcribed what Jamie was saying into English and immediately translated it into Mandarin. This demo triggered a spontaneous applause from the audience. Like Gurdeep said in the keynote: You can't get this stuff if you are using ten year old technology.

Lync / Skype for business works over the internet without the need of any VPN, and in the client we have the familiar "bars" to tell us if our network connection is strong or weak. User feedback on the call quality can easily be collected and stored in a database for reporting using the "Rate my call" feature built into Skype for business.

Another demo using a Jabra Evolve headset and the Jabra Direct software was shown to demonstrate the "Jabra intelligent call transfer." It is a feature that will monitor your headset during an ongoing Skype4B call and if the headset is disconnected it will automatically transfer the call to your mobile telephone.

I guess there should have been a demo of the Yealink SIP-T22P phone, but it was acquiring an IP-address so it did not happen. More enterprise voice features were discussed: delegation, call park, group pickup and shared line appearance.

Shared Line Appearance (SLA) is a coming feature that will be available later this year for both Skype for Business as well as for Lync 2013. SLA allows multiple devices to share calls and state information, it is a signaling application that scales well. An incoming call will arrive to the SLA application which will alert at multiple devices at the same time and the call can be picked up from anyone of the configured devices. When answered the line state is shown on all other configured devices. 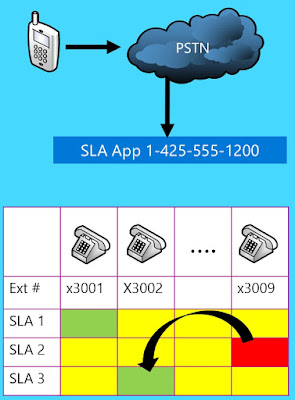 
ACD (not Contact center functionality, but for internal helpdesks) is available in Skype for business through Response Group services.

Another service called "On-premises PSTN Connectivity" will be released in 2016 which will enable organizations worldwide to use Office 365 voice features with existing (on-prem equipment) trunks. (It looks like the discontinued "Hybrid Voice" is resurrected.) 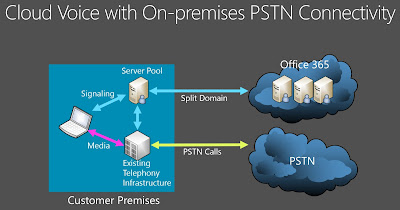 Can the call-via-work feature be enabled/disabled via policies?
Yes, and in addition it is possible to configure what number the call back should go to. (The call back can go to a PBX phone or any PSTN number really.)

Will the rate-my-call feature use any information coming from the client software?
No, the rate-my-call is the users perception only, the actual MOS-values for the call in question is not populated into the dialog or the feedback submitted by the user.

How will SLA be administered?
Using PowerShell (90% sure of that answer.)

Will SLA be available on "Aries" devices?
No, only on the Polycom VVX series, and only on one specific device to start with. More devices will be added further on.

Will the Skype translator be available for on-prem installations?
No, not right now, but maybe it could become available as a cloud service in the future.

Will the SILK codec be available for conferencing in Skype for business?
No, it is being rolled out slowly across the portfolio. First for Mobile, now in the rich client as well, next MCUs.

Are there any changes in CAC in Skype for business compared to Lync 2013?
No.

Is Remote Call Control deprecated in Skype for business?
Yes.
Posted by Kressmark at 12:37 PM