Presented by the Canadian Scott Stubberfield, Program Manager at Microsoft. 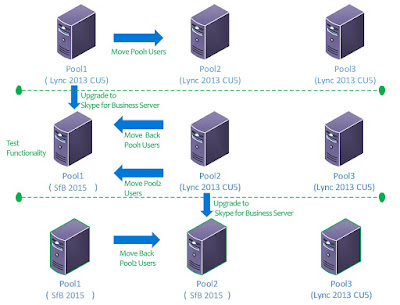 Customers do not want to be forced to upgrade the hardware when upgrading the software. With in-place upgrade we can reuse all Lync 2013 hardware, firewalls, configurations, etc. Smart Setup will check with a "Windows Update" like service and download new software before starting the upgrade.

Upgrade the user pool(s) first, then the mediation servers, edge and CMS pool.

The command to move all users from one pool to another.

command on all front-ends. This to stop and disable all Lync 2013 services (so that if the server would reboot they would not start up as Lync 2013 again.)

How do we upgrade a Persistant chat pool?
Same procedure as a user pool. Right click the pChat pool, upgrade, run Disable-CsComputer -scorch, and this procedure will move all the existing chat rooms to Skype for business.