Second day of diving is done. Glad to see that we have Andrew John Price (@legendarytechy) in class. Follow his blog at http://lyncme.co.uk


First we discussed some nice tools that are free for anyone to download:


The collection of Debugging Tools includes...


...and a question that came up about the difference between OCSlogger and OCStracer?

OCStracer is the cmd line version of OCSdebugger. For example you could use...

...rather than using the GUI.


Some logging settings were added to the client policy in Lync 2013. 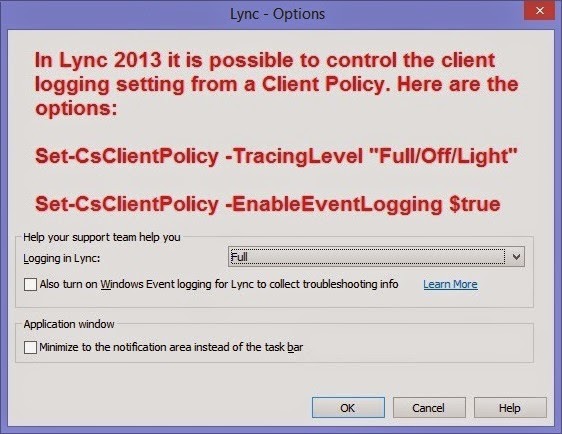 
Got a good question on Lync Contacts from a friend (thanks Robert!) Here is how Lync Contacts works for a user that is disabled or removed from Lync. If the user is "Temporarily disable for Lync Server" in CSCP (Set-CsUser -Enabled $False) and then enabled again - the user WILL retain the list of Contacts in the Lync 2013 client.

However, if the user is "Remove from Lync Server" in CSCP (Disable-CsUser) and then added to Lync again - the user WILL NOT retain the list of Contacts in the Lync 2013 client.
Posted by Kressmark at 6:40 PM