Series and the topic for today were Core Server Reliability and Patching Deep-dive.

The Webcast was recorded and is available online from the link above. 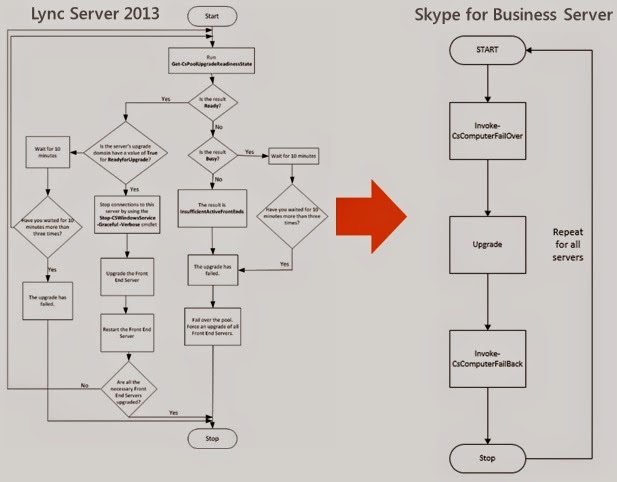 Patching is easier in Skype for business compared to Lync.

Fadi Al-barghouthy started with a quick look back at Lync 2010 and 2013 architecture, discussed Windows fabric and its impact on patching the servers. The presentation the continued with discussing the changes made in Skype for business. Windows 2012 R2 is the recommended OS for Skype for business server due to the newer Windows fabric version. Invoke-CsComputerFailOver stops and disables all S4b services (but is not supported for 2 FE pools, 3 or more!) Invoke-CsComputerFailBack starts services and notifies Windows Fabric that the server is back online. These commands does not require Windows fabric v3 and can be used on Windows 2008 as well, they also have "progress indicators" in a nice Powershell format of course. (Windows Fabric v3 is not supported on Windows Server 2008 R2.) Following the short intro was a complete patching demo showing the workflow of patching a 6 front-end Skype for business pool.

Is a restart always required after patching a server?
No, a restart is not specifically required unless it is required by the updates themselves.

If a Front-end is rebooted after patching, is there still a need to use Invoke-CsComputerFailback?
Yes, a failback has to be done after a computer failover.

Can the failover/ failback commands be used with S4B on Windows 2008 R2?
Yes.

Is there any noticeable difference for admins or end users if you have S4B running on an OS with Windows Fabric v2?
No, not to noticeable to admins, however, v3 has improved handling of network latency between other pool members.

Should we patch one server at the time or multiple Front-end servers at the same time?
One at the time, but this is still much faster than in Lync Server 2013.

Posted by Kressmark at 5:21 PM