It is nice to see a lot of little things being fixed here and there in the software we use daily.
Do you remember this fine dialog from the Lync 2010 client?
(Tools / Options / Personal / Advanced...)

It governs how the client tries to connect to the server. Way back in the days of Office Communications Server 2007 R2 it was possible to connect to the server using TCP rather than TLS. This option was removed in Lync 2010 when TLS became the one and only secure way to communicate server/client in Lync, but the setting remained even in Lync with this radio box of the connection type greyed out.

If you are really alert you will even notice it says "...server name or IP address:" and that was supported when using TCP, to use an IP address that is. In Lync 2010 this GUI is a bit misleading since an IP address can never be used when connecting with TLS.

Much simpler, clearer and easier to use.

I also like how the toast pops-up with photo as you have tagged someone, a simple improvement that makes the software more fun to work with. 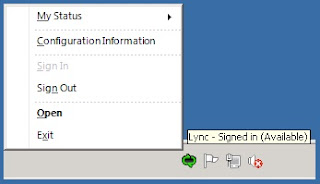 In Lync 2010 when you hold down the Control key and right click the Lync tray icon, you will see the additional "Configuration Information" menu selection in the list. In Lync 2013 this is even easier to reach, you simply press the Control key once and the next time you right click the tray icon, the menu selection will be there. I do not know if this happens by chance or by design - but I like it!

Adding contacts is definitely a clearer task in Lync 2013 than before. The user will be much more aware about if they are adding an internal colleague or an external contact via federation.

There is also a video preview, like a mirror, straight in the chat window that one could use to check the tie and hair before starting a video call; could be important since people can see you even when you are not speaking using the new gallery view in a Lync 2013 video call.

There are of course many more good new and enhanced features in Lync 2013.

You can try the "Lync Client 2013 Preview" yourself as part of the "Office 365 ProPlus Preview". Lync 2013 can be connected to a Lync 2010 server and it is even possible to install the Lync 2013 client on the same computer as a Lync 2010 client and run them in parallel.

Posted by Kressmark at 2:24 PM