Commsverse 2020 - BRK307 - Analogue to Cloud. The Challenge of Enterprise Migration to Microsoft Teams

Session summary:
As enterprises rapidly adopt Microsoft Teams for voice and collaboration, they often underestimate the challenge of connecting Teams to everything in their business. From connecting elevator phones, control systems, DECT phones and other analog devices to Teams, to innovative ways to connect emerging Voice Bots, at this session you’ll learn how to avoid the migration pitfalls and connect your legacy world to new.

People who knows old-school PBX telephony are fading away, but Audiocodes have a lot of old people employed. So, they know this stuff :-) Audiocodes sell SBCs in all sizes, software, telephones and room solutions for Teams.

Analog lines are needed for lift phones, security phones, rugged phones, DECT phones, fax machines, modems and extensions that may not require full Teams licenses, but analog lines are often forgotten until the last moment in a migration. 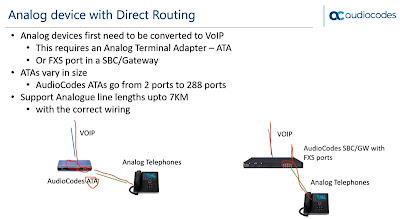 Analog Terminal Adapters or SBCs are used to connect analog lines to Teams.

It is possible to create objects in AD to allow name dialling for other Teams users to an analog line. SIP and DECT phones can be connected straight to the SBC which can act as a "mini-PBX" with a connection to Teams. Microsoft is looking into analog line presence in Teams, and message waiting indication.

Univonix migration suite can be used to migrate PBX configuration to Teams. PBX Assessment is a tool to create a PBX Assessment report looking at feature parity.

One-voice resiliency is a licensed feature in Audiocodes SBCs which works about as an SBA worked in Skype for business. Endpoint registration can happen in Teams or in the local SBC, and the SBC can failover to SIP Trunk/ISDN if connection to the cloud is lost. This is only supported by Audiocodes 3PIP phones.

Microsoft is working on a HTTP Proxy which is a piece of code that will be delivered to Audiocodes and other technology partners to be integrated in SBCs. This will allow for even more functionality if connection to the cloud is lost. The feature is going into TAP testing now. The proxy will download a site dial plan and configuration from Office 365 and it will be possible to route calls via a 4G backup to the cloud, or via a SIP trunk to PSTN. This can be implemented as an OSN module in the SBC or as a gateway with a configuration GUI or as a VM instance for software-based SBCs.

All Audiocodes SBCs have a REST API interface that can be used to query the SBC about calls and even manipulate the routing as the call is happening. An example of one such implementation can be found in the whitepaper "Connecting AudioCodes Session Border Controllers to Microsoft Flow". In the example Microsoft Flow is used to send an email to site security as soon as any user dialled an emergency number 999 (112). Another example would be to send an SMS in case the SBC reaches 90% capacity. 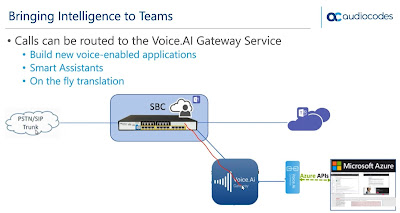 How should we handle fax?

Ideally Fax would be handled completely offnet from Teams. The SIP carrier can send the Fax call to the SBC and then the SBC/Gateway will forward it to the appropriate FXS port. One comment about fax is that it is quite reliable over SIP to Fax Server/ATA when the number of pages is low, larger documents might run into reliability problems

For large enterprises would you recommend a separate SBC for Analog/normal sip endpoints, for management purposes and when doing maintenance on numbers you do not mess up the central routing?

How can we get local site Direct Routing voice survivability?

With OVR (One-voice resiliency) which is a license on the SBC and Audiocodes phones in 3PIP mode, this also works with redundant SBCs.

What kind of dump/export is analyzed by the Univonix tool?

It will read a datadump / data file from the PBX, and in some cases the tool can connect to the PBX to retrieve the information.

ATAs would connect to a central SBC - Can you provide some tips to simplify routing every time a new ATA gets added?

Use the dial plan feature in the SBC. There is also a tool called routing manager for bigger installations.
Posted by Kressmark at 6:25 PM