Session summary:
Microsoft Teams is changing the way people communicate and work worldwide and will be part of our lives in the decade to come. Even though it is very robust and comes out of the box with fantastic features, it lacks native support for many business scenarios and this is where you can make the difference by extending it with custom Apps making everyone much more productive. Long gone are the times where software development was restricted to a few geeks living for years in basements, in this new decade anyone have super powers to be a developer and Microsoft Teams clearly embraces and encourage any power user to build their own applications. In this session you will travel through all Microsoft Teams development methods. It starts with the Power Platform, makes a pit stop on the Microsoft App Templates and SharePoint Framework and finishes with the native Microsoft Teams Development. Looking to get more out of Microsoft Teams? This session will teach you how and what is the method that works best for you. 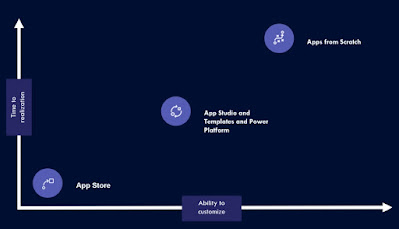 How to extend Microsoft Teams

They are secure, well documented, anyone (with permissions in a tenant) can install them and they are free (but some of them may incur Azure costs.)

There is a good "Coffee in the cloud" video discussing App templates.


Power Platform is integrated with Teams and every Power app is a Teams app.

Two examples of apps developed by non developers from Tacoma Public Schools and the American Red Cross where shown.

Power Automate (previously known as "Microsoft Flow".) can be used to for example post a message in Teams. There are tons of connectors available to build integrations with Power Automate without the need to code.

SharePoint and SPFx (SharePoint Framework) can also be used to develop apps for Teams. SPFx have built-in Graph support, Azure AD secured APIs and hosting in SharePoint Online. There is silent authentication between a Teams client and SharePoint available through the _layout system in SharePoint.