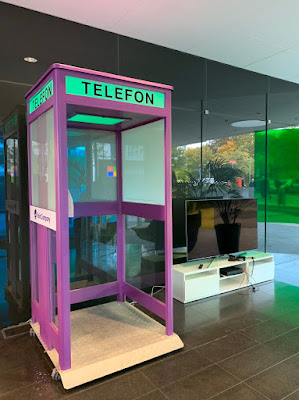 A telephone booth, telephone kiosk, telephone call box, telephone box or public call box is a small structure furnished with a payphone and designed for a telephone user's convenience. Such an installation is currently present in the lobby of Microsoft's Swedish subsidiary office in Akalla outside of Stockholm. In the 1980s Sweden had 44,000 of these booths scattered all over the country, but then the mobile phone became affordable for common people and the number of telephone booths started to decline. The first booth was installed in Stockholm in 1890, but by the year 2015 the last telephone booths in Sweden had been decommissioned.

All these booths were originally put in place and maintained by the Royal Swedish Televerket, who also had one of the coolest company logos of all time. 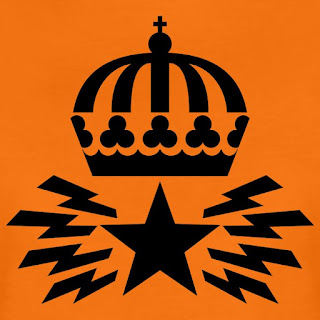 Televerket's logo aka "The Crab"

Nowadays the Swedish state have sold Televerket and it has transformed into the public Telia company.

So, what about the anachronistic installation at the Microsoft office?

It is actually a booth retrofitted by Telia and equipped with Microsoft Teams telephony that is currently available from Telia. The top part of the booth is green = available in the photo above, and when someone gets on the Microsoft Teams phone in the booth the top part will shift to red = busy. Also, the glass windows will be changed to frosted for greater privacy when in a call. The booth is built to get people to test telephony through Microsoft Teams and it also illustrates the connection between old style communications and modern solutions.

If you want to test the booth IRL (AFK) there is an opportunity at the Swedish TechDays which will be held in Kista on October 22-24.

An article in Swedish about the booth is found here: Gammal telefonkiosk ska demonstrera modern telefoni
Posted by Kressmark at 10:03 AM